Yeah, they are nice things.
Won't be getting rid of mine anytime soon.
Stirred, not shaken.
Top

Clubmate Nick took his 6 along for a play. 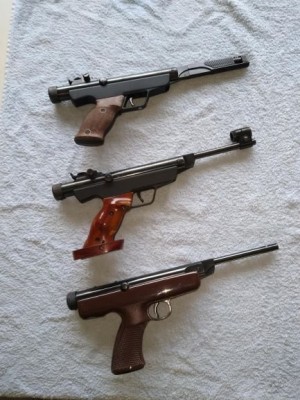 Rebuilt from a bag of bits, it's lacking sights but is in great condition and shoots as it should. I'll be twisting his arm to sell and, if he does, I'd graft a rail on for either a pistol scope or red dot to get round the unobtainable missing sights.

It was the first time I'd tried an Original pistol with the moulded plastic grip and it fitted very well. I found the diamond pattern checkering was quite "aggressive" and really bit in to the hand but the surprise for me was that, in the lack of extensive practice and testing, I'd consider it better/more comfortable than either of the grips on my 6G or M.
Stirred, not shaken.
Top

My previously mentioned clubmate Nick finally came round to the idea of parting with his Original 6 and now it's in my hands.

After getting first a 6M and then a 6G, I never really considered getting one of these as I thought, with that large moulded grip, it looked a bit BSA Scorpion like - big, heavy and clunky. However, when I actually tried this one, it was a revelation as it fits my hand far better than either of the more glamourous/desirable G and M models. I had to have it.

Looks-wise, it's easily a 9.5/10 and it came with some of the original packaging, not that I get all obsessive collector-y with such things. 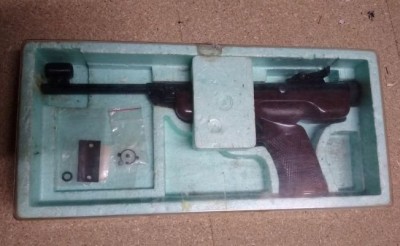 However, it's not all sweetness and light. The keen eyed among you may notice that the front sight isn't the correct type and is too low. And there's an awful plastic squeak as the gun is cocked, both of which I knew about before money changed hands so I knew up front that a bit of work would be required. Because of the holdover imposed by the front sight (and a loose rear sight - easily fixed, I hope,) accuracy tests aren't really showing what the pistol is capable of but it's grouping well enough under those conditions and I've no worries in that regard. A chrono test showed it to be fairly consistent giving 10 fps either side of 410 with Hobby pellets so in the ballpark, I'd say. Rather strangely, the Hobbys gave higher velocities than Excite Econs (390fps-ish) - first time I've ever seen that, it's usually the other way around.

The cylinder end cap was a bit loose and there wasn't any preload on it so I unscrewed it for a look and, well, oh dear...

Not something I wanted to see. 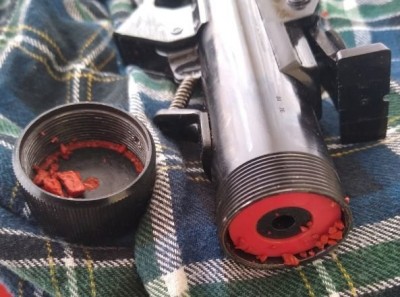 I imagine that the tortured plastic squeak I'm hearing on cocking is from some crumbs off the seal caught between the piston and pinion teeth meaning that a complete strip will be required. I'm also under the impression that there's supposed to be a shim(s) of sorts that goes in the cylinder end cap and there isn't.

I've been lucky in that my other Original 6 pistols had been previously resealed before I got them and are in fine working order. Consequently, I've never had the need or urge to get into the guts of them. Looks like that is about to change.

Have the fine gentlemen of CAPA got any tips and advice on the strip and rebuild of these fine pistols please?
Stirred, not shaken.
Top
Post Reply
6 posts •Page 1 of 1