Is this Junior for sale in good shape? With pic.

A place to discuss all things Webley. As this is probably the most collected airgun maker we felt it deserved a section of its own.
Post Reply
5 posts • Page 1 of 1

Is this Junior for sale in good shape? With pic. 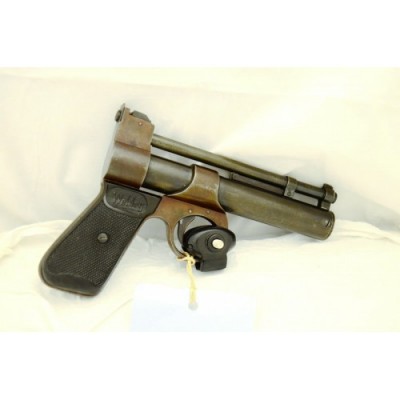 I've located a Webley Junior for sale but it's one I'd have to have shipped to me and cannot view it in person.
There is a photo of the pistol provided and it is said to be on good condition. It's maybe hard to tell from just the one photo, but does it appear to be in acceptable condition? To me is seems there is no more bluing left, but otherwise seems intact. I could be wrong and perhaps the photo is overexposed and there is more original finish left than I'm guessing.
Thanks for any thoughts.
Top

Post-war Webley Juniors in similar condition to the one in the photograph are quite common in the UK and would normally sell for £40-£60. I wouldn't consider it to be in 'collectable' condition, but it might do until a better example comes along.

You are probably already aware that post-war Webley air pistols can be roughly dated from the address stamped on the side, with those carrying the 'B4' post code dating to earlier than 1958 when the company changed premises.

I have this unusual 'B4' Junior with some engraving applied to the breech block by Webely apprentices to disguise minor casting imperfections and allow the pistol to be sold rather than scrapped. These are quite rare with the engraving differing slightly depending on the particular apprentice who carried out the work.

Again a nice example you have!

I can see now the one being offered for sale is not in good condition. It's offered for $200 Canadian which now also seems high.
Webleys are not quite as common my way and can be a touch higher in price, but that asking price now seems unreasonable.
Thank you for the info.
Top

Fishguy, Webley Juniors similar to the one in your photo go from $100 to $150 here on Vancouver Island; generally closer to $100. They are not too common here.
Top

Thanks gab, nice to hear from s fellow Canadian about our prices across the country. Webleys aren't nearly as common here as they are overseas but based on your info which is appreciated, the one being offered is high for our market.
Think I'll pass on this one and wait for a better gun for about the same price.
Top
Post Reply
5 posts • Page 1 of 1