A very unusual and rare pistol. My Union Switch and Signal 1911 in .45 ACP (Automatic Colt Pistol).
As many of you will be aware, the Colt 1911 pistol is probably John Moses Browning's finest hour. A design that has endured over one hundred years and used by countless Military and Police forces around the world. They are still in production today and if I could I would have a Kimber version of this pistol.
However, owning the Union Switch and Signal version is one of the highlights of my collection. Produced in 1943 for the American Military and as part of the War Effort an order was placed with Union Switch and Signal Company of Pittsburgh Pennsylvania to produce 250,000 of the 1911 model pistol in their Swissvale factory. In the end it is believed that only 55,000 were produced in total though that number may be less, there is no definitive proof.
The reason for the low production numbers is Union Switch and Signal was the last company to be awarded a government contract and as requirements were reduced in early 1943, the last contract awarded became the first to be cancelled, last in, first out. Only the Singer Sewing Machine Company production of 500 pistols is rarer and not all of those are accounted for either.
Desirable for both it's rarity and quality this is a pistol very seldom seen in the UK, there are very few. A good friend of mine owned it and I was very lucky to get it: 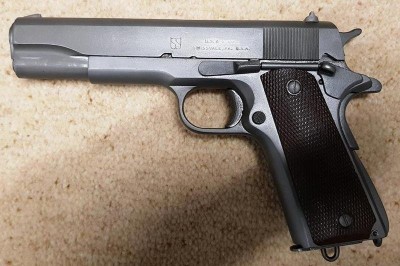 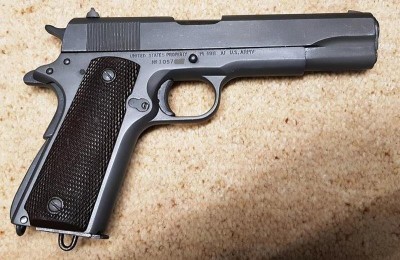 Yes, for the sharp eyed amongst you, it has the incorrect magazine fitted, I will take a photograph with the correct mag when I am next near it.
graham.
I’m going off to go find myself. If I’m not back by the time I return, keep me here.
https://tamesidepistol.club/
Top
Post Reply
1 post • Page 1 of 1